Harsh Gogi, Editor-in-Chief of Punjab Feedfront, paid obeisance at the feet of His Excellency Mata Chintpurni and the team for the goodwill of the team. She started her journey with her family members in the morning and reached Mata Chintpurni Dham at around 10 am. It was seen that even after the end of Navratri, the arrival of innumerable devotees of the mother was astonishing. They lined up at 10:54 a.m. and got a chance to visit Pindi 6 hours later.

Darshan with a bribe of 500 to 1100.
The long queues from the bus stand to the temple where people were waiting for their turn, enduring the hot and cold sunshine and chanting Mata Rani, directly offering offerings to the devotees of Prasad shops who come after climbing the stairs of the temple. Rs.500 is demanded for fencing in the middle and Rs.1100 for direct entry to the building. As soon as the ladder was completed, the owners of the second and third shops at the top would take the money and send the pilgrims to the line by forcing them to enter the line, due to which the back row would not move.

Police administration may also be partner
Himachal police youths were deployed in every corner and trying to control the crowd. When they were informed about the dishonesty for Darshan, all they said was don’t let anyone enter the line. No police official has spoken of taking any action against the shopkeepers. The temple administration has put up placards saying that if anyone asks for money for darshans, give information, but if no action is taken even after receiving the information, then it becomes clear that this work is done with the cooperation of all and everyone has their own. The part is found.

The priests of the temple offered sacrifices to the people in an indecent and disrespectful manner
It is said that one should not do evil when one goes to a religious place, but God also says that it is a sin to remain silent when it is wrong. I was saddened to see the prime insult taking place inside the temple. Due to the crowd, Pujari Prasad was grabbing the offering by the hand and throwing it inside. Administrative posts should take special care that Prasad should not be insulted in any way and complete dedication and manners should be observed while dedicating Mata Chintpurni.

The temple trust needs attention
Visited for the first time after the lockdown and found a lot had changed. The Temple Trust desperately needs to pay attention to these things. Bribery for Darshan, insult of offerings, robbery of devotees by shopkeepers, harsh treatment of customers by shopkeepers from other states and dumb, deaf and blind action of the police administration in spite of all these are the most important things towards which. It is very important to pay attention. Otherwise, there is no hesitation in saying that if this continues then every devotee would prefer to pay homage at home instead of coming to Himachal again and the tourism department of the Himachal government will only be able to kill flies. 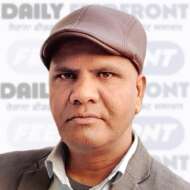